Literary Holland : Quarterly Bulletin of the Foundation for the Promotion of the Translation of Dutch Literary Works No. 7 - September 1959 p. 8-9

[H.J. Friedericy who was born in Onstwedde in the province of Groningen, spent his childhood in the south of Brabant. After studying at the University of Leyden he entered the colonial service in the former Netherlands East Indies at the age of twenty-one. In 1933 he was granted his Ph.D. at Leyden University on an ethnological thesis Class Distinctions Among the Bugis and the Macassars (De standen bij de Boeginezen en Makassaren). In 1946 he became Director of Political Affairs in the Ministry for Overseas Territories in The Hague, and in 1947 attaché in charge of Indonesian affairs in New York. In 1951 he became attaché for cultural affairs, first in Washington, and later in Bonn and London. Among other things he has written articles on constitutional law and adat law, travel stories, a collection of short stories about South Celebes Princes, Fishermen and Farmers (Vorsten, vissers en boeren), and the two short novels Bontorio and The Adviser.]

THE LAST GENERAL
Friedericy worked for many years as a civil-servant in South Celebes, the region which forms the background of his books. In 1947 he published under a pseudonym Bontorio, which could be classed as a historical novel, although the period he deals with is scarcely sixty years ago. He describes life in Bone, one of the South Celeban principalities that did not come directly under Dutch rule until 1905. The hero of the story is Mappa, the leader of the Bonese army and Aru of Bontorihu, one of the Bonese vassal-states.
The story begins with the arrival of Mappa's mother in Bontorihu, where after the death of her uncle she is elected Aru by the Council of the small mountainous state. She hates the country, and she hates its people, she is a malicious, hysterical woman, feared by everyone. She only feels affection for her eldest son who, while still a youth, is murdered at the Bonese court by the husband of his mistress.
This woman, her ever sad but courtly husband, her son Mappa and his brother, uncles and aunts, friends, servants and slaves are brought to life before our eyes. Mappa gains the prince's favour during a hunting party, wins military glory in local wars against other petty princes, and is made a general, so entering court circles. A strange mediaeval world of princes, courtiers and vassals is set before us with knowledge, ability and a great talent for narration. Deer-hunting and wars, court intrigues and love-affairs, attacks and stabbings, an unusual and little known society is gradually pieced together by the writer. No less excellent are the descriptions of the tall, dark houses and the prince's council chamber, together with those of the landscape and vegetation, submerged by the heat of the tropics and tropical rains. Friedericy's style is extremely evocative and graphic and at the same time sober and direct, despite the exotic setting and events.
Mappa - also called Bontorihu - remains the central figure in the book. A favourite of the prince, but never a courtier, he sets little store by jewels or costly robes and chooses his mistresses from among the peasantry. He is a despotic, feudal lord who despises the common people from whom he extorts money, only to gamble it away on cock-fighting and dice. Friedericy succeeds in making a complete man of him, a man with good and bad qualities, with a natural talent for strategy, great courage, and unswerving loyalty to his prince - the weak, sickly, prematurely aged opium-addict, Auropone of Bone.
The outbreak of war with the Dutch, resulting from the failure of the Bonese to observe old treaties and recognize Dutch supremacy, is a great day for Mappa. He repulses the first landing in the marshy coastal areas with a picked force of sharpshooters, whom he has trained himself. A second landing is successful, the capital is taken and the king flees together with a few trusty servants. Bontorihu also escapes. Dutch patrols are sent out to capture the prince and his general.
The end of the book is surprising. The patrol is joined by a noble from Bone who wishes to hand over the fugitive general to the Dutch from motives of revenge. For six weeks they roam through the country, seeking the fugitives. Then one evening the report reaches them that the king has been captured, the next day their guide has disappeared. But he reports to a government-post and reveals himself to the Dutch official there as Bontorihu. When his prince has been captured, he no longer wishes to go free.

(Number of words: about 30,000. Fragments translated in English are available) 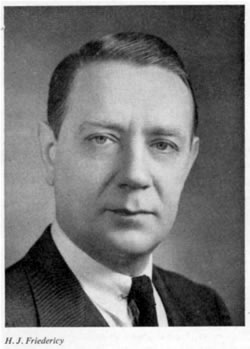 THE ADVISER
In 1958, more than ten years after the appearance of Bontorio, Friedericy who had entered the diplomatic service after Indonesia had obtained independence, published a collection of short stories, most of which had already been published in various periodicals. These stories, called Princes, Fishermen and Farmers and set in the South Celebes and near-by islands, once again testified to his talent as a writer of narrative. The same year saw the publication of a new short novel The Adviser.
This book deals with events that take place in the nineteen-twenties in the village of Sungguminasa, the centre of one of the government districts, about eight miles from Macassar. It is the story of a friendship between a young Dutch civil-servant, called Toean Petoro on account of his position, and his twenty year older assistant Anwar, a Macassar descendant of one of the less prominent princes.
The construction of the book is very simple. In a series of short chapters the writer unfolds the situation and depicts the ripening of the friendship between the two men, so dissimilar in race, upbringing, age and background; one of them representing the rulers, the other the ruled, the younger being the superior of the elder. The book has an autobiographical note about it; it is made up of memories, and stems from the writer's urge for self-justification and desire to come to terms with a period in his life which is closed for good. He has not used a word too many in the book. Not only has all dramatization for the sake of effect been avoided - something which may also be said of Bontorio - but the book gives the impression that all literary techniques have been reduced to an absolute minimum.
Great and small events from daily life are related with superb skill. Almost every chapter contains a rounded-off story. There is, for instance, the story of the fraudulent clerk, of the knifing at the wedding, of an attack planned on the generating station, together with anecdotes in a lighter vein, such as the ghost in the banyan-tree that turns out to be a dog dying, and the delightful story of the old woman who gave her son to the unmarried Toean Petoro out of gratitude for medicines and milk sent to her when she was ill. As in his first book, Friedericy gives the ending a surprising twist that makes the whole story stand out in relief. At the San Francisco aerodrome Toean Petoro, who has not been Toean Petoro for many years now, meets a number of Indonesian students. The name is mentioned of a new cabinet-minister who is the son of Anwar, who has since died.
‘His father was one of the best Indonesian civil-servants,’ the Dutchman said.
Above the roar of the engines and the sound of a woman's voice, he heard the Menadonese say, ‘I beg your pardon, Sir..., but in our eyes Moesa's father was one of those collaborators who did our country a lot of harm.’
The Dutchman got up and paid. The woman announced through the loudspeaker: ‘United Airlines...Flight one nine two to Chicago and New York...gate four...all aboard please!’ He shook hands with the Indonesians and they smiled.’